MISSION STATEMENT
The Centre Pieces Quilt Guild is an organization to promote a full appreciation of quilts and quilting through sharing, teaching, and fellowship.

A little Centre Pieces History....
On April 20, 1983, Cindy Houlch, Cindy McNab, Jody Crust, Dorothy Milhelic, Jean Smith and Gloria Braun met for the purpose of forming a National Quilting Association Chapter in the Central Pennsylvania area. Violet MacMillan (another of the founding members) was unable to attend. Gloria Braun suggested the name Centre Pieces and all others agreed. February 20, 1984, a formal petition was made to National Quilting Association (NQA) to form a chapter to be known as Centre Pieces and Chapter #238 was created.
In 1988, the Guild held a "Logo Contest" and member Pat Hock's design won. Our logo has remained the same to this date.
In 2001, the Guild established the Renaissance Member Award. This award is a lifetime membership to the Guild to honor a member that through a number of years has served the Guild in many ways. Someone who encourages the passion for quilting and helps to foster goodwill between the quilting community and community at large. Violet MacMillan, one of our founding members, was the first recipient of the award. Jean Smith, Betty Knouse, Gloria Braun, Nancy Silverman, Diann Dunham, Louise Fox, Claire Amick, Becky Shirer, and Bobbie Muscarella have been awarded the Renaissance Award since then. Sadly, Violet and Gloria have passed away and are missed dearly.
From that initial group of quilting friends, the Guild now boasts a membership of almost 100.
The following history bits were preserved by our Historian, Becky Shirer.

In September, 1983, as a novice quilter, I was excited to spot a blurb in the Centre Daily Times about a new quilt group forming in the community, inspired by a small core group of women with big ideas, and inviting all interested to attend.  At that initial gathering, attendees discussed their interests and goals for the group, officers were chosen, and Centre Pieces was off and running.  Within the first year, the guild established interest groups, demonstrated quilting skills at the Central Pennsylvania Festival of the Arts and Ag Progress Days, planned a bus trip to G Street Fabrics, made a pot luck picnic — we’ve always loved to eat — had grown to 48 members, and formally became a chapter of the National Quilting Association.  We’ve since had a long, rich history fulfilling our goals of promoting the art of quilting among our members and the wider community and offering each other moral support, inspiration, and encouragement to try new things.  Here’s to many more years of friendship, creativity, and finding ever new ways to enjoy the world of quilting! 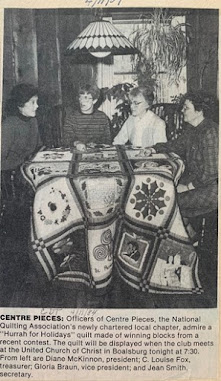 With our long-awaited reunion and airing of the quilts coming up, I was reminded of an earlier such outdoor celebration. In June of 1987, our summer picnic was graciously hosted by then-president Helen Meahl at her home in Boalsburg. Helen’s lawn was the perfect backdrop for lots of beautiful quilts fluttering in the breeze. It will be great to meet with friends again next week and to see the results of their creativity from these last long months hanging on the lines at Orchard Park! 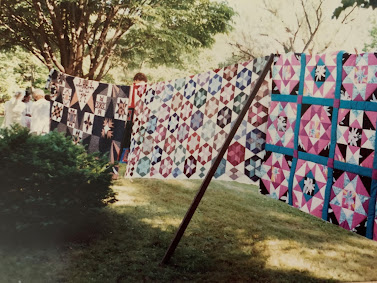 It was in 1992 that the National Quilting Association, of which we were a chapter, first observed National Quilting Day, and it has since been celebrated all over the world on the third Saturday in March.  Here is an excerpt from an article by Sue Roy in the Fall 2000 edition of NQA’s Quilting Quarterly:

Centre Pieces (PA#238) of State College, Pennsylvania, celebrated NQD with all-day demonstrations and a quilt exhibit.  Marge Reeder was the coordinator for this year’s event.  This has been a yearly event for the past five years, held in the Nittany Mall.  The merchants are happy to have the quilters display their quilts.   They plan to continue this event for many years to come.  They did have several visitors at their next meeting as a result. 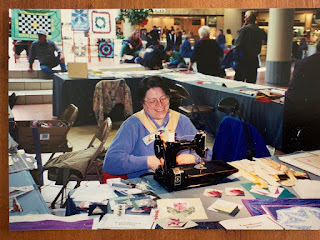 Centre Pieces Turns 30
Over the years, we have occasionally marked significant milestones in the history of our guild.  On September 9, 2012, we kicked off the new guild year with a birthday party!  It was a fun celebration of our 30-year history which was brought back to life through reminiscences of past presidents, scrapbooks, and old newsletters.  Hilary Kleckner baked a lovely cake.  The officers (and the cake) were bedecked in pearls for the 30th anniversary, Carrie Fala far and away the most pearly!  We’re coming up on our 40th before too long.  Rubies! 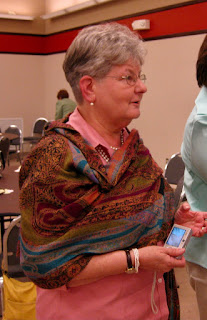